What does it take to make 1,600 pasties in eight hours?

It takes lots of planning, hours of preparation, a well-oiled machine made up of happy workers and a personal realization that Forbes United Methodist Church's pasties are the best you've ever eaten.

"Our crust is what makes the pasties so good!"

"When we combine pork with beef along with all those fresh vegetables — Wow!"

No one would disagree with Proctor's Forbes Church's tried-and-true recipe, but the number one ingredient is the fellowship shared by everyone who shows up to peel or chop; grind, mix, roll or crimp; bake, cool or wrap. Volunteers range from ages 8 to 88, which include Forbes' members, their families and friends.  Marie Chapinski is quick to say, "Our volunteers work hard, have lots of fun and love to laugh. The younger crew runs circles around some of us bringing energy to the church basement that lifts all of us up. They're great."

What about the toppings? Is your favorite gravy, ketchup or butter? Maybe you eat them plain or perhaps you are adventurous with salsa, applesauce or creamed corn. It really doesn't matter and yet it matters a great deal. Pasties have long been a favorite of Northlanders and are guaranteed to satisfy the biggest of appetites.

Forbes does this project three times per year in January, April and October, as pastie sales serve as an ongoing fundraiser for the church's general budget. Each pastie sells for $5.00 and is well worth it. From the old time miners to the transplants from the land of chicken pot pies, it's hard to find someone who doesn't appreciate the taste of the crisp buttery crust, a mix of carrots, onions and rutabaga along with just the right proportions of beef and pork. There are a few other secret ingredients that seal the deal. Those will be taken to the grave.

Forbes has been baking pasties for more than 20 years. Many past and present members were instrumental in getting this project started at Forbes with forward thinking and enthusiastic leadership.

Rumor has it there's an old "pastie song" written that the present pastie team promises to perform it at the next sale. Fact checker tell us there was a bake off in Virginia 15 to 20 years ago where Forbes took first place.

According to Francie Wilmot, who is considered today's "Pastie Princess," they have "...topped making 1,300 a few times, but our recent sale took us to 1,600 and we still finished making them in less than eight hours."

If you haven't tasted a pastie from Proctor's Forbes United Methodist Church, you haven't ridden the highest level of pastie land. As Pastor Karen Ashton would say, "Join us for a pastie and prayer. They will both fill you up and make you feel full of something special!" 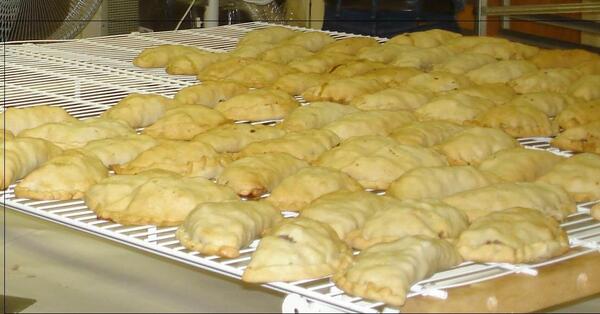